The unit looks terrific. 11 weeks of jam packed, fascinating topics around industry methodologies for threat and vulnerability modelling, to actual working practical knowledge including building a SIEM with Splunk, network packet tracing en mass and taking a scientific approach to finding anomalies and potential threat signatures by exploiting ML across the many data points that will be captured. Here’s the modules:

A forest from the trees overview of the broad field of SecOps:

Getting to play with the internals of Cisco routers and switches has been a blast. These devices run Cisco’s IOS (Internetwork OS). As a user of IOS get to use a high-level shell when on the devices. For example, here I configure a specific Ethernet port on a Cisco Catalyst Ws-C2960-24TT switch to prevent MAC address flooding by configuring the specific port to learn the connected clients MAC (sticky) and enforce it:

Before any packets have flowed through the switch, can see it hasn’t learned any MACs yet:

After pushing some ICMP echo packets (ping) from the connected client computer through the switch to the router, can see it learns the MAC of the client (0009.7c41.3c61) that is connected to the specific Ethernet jack on the switch:

The test. Unplug the first test host from the switch port. Plug a new host (i.e., with a different MAC) into the same switch port and try to ping the router on the other side of the switch. The switch will immediately shut the port down:

Identification of the vulnerabilities that exist in a computing system, triages and ranks based on risk and recommends remediation that balances constraints (e.g., environment, design, cost, return on investment).

In terms of the MITRE ATT&CK framework vulnerability assessment falls into stage 1, the Reconnaissance stage:

Basic tools of the trade in this realm:

7 Machine Learning for Collection and Detection⌗ 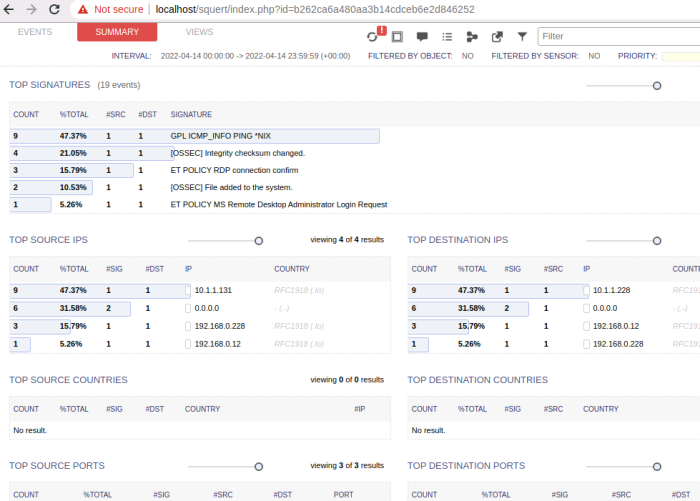 First up a simple class based rule. The following will detect any ICMP echo (ping) requests sent out from a specific Windows Server host called DMZ-Corporate. Things to note:

Once apply any pings that come out of the old Windows box should be sniffed and shown in Sguil like so:

Now for a content based rule, that will dig into the guts of a packet.

Now throw a TCP packet with a data payload that contains UniqueString1234 at port 1337 on any host (see notes on scapy below), Sguil will now detect and pick it up.

Scapy is just a beautiful little TUI. It interactively walks you through the crafting and transmission of a network packet by providing an object model you can whip together and has brilliant tab completion. After firing it up on a TTY you’ll be thrown into it’s interactive shell, like this:

Using SQL you can now throw whatever questions you have at the data.

What are the 20 most common types of security events? SELECT COUNT(*) AS tally, signature, signature_id FROM event WHERE status=0 GROUP BY signature ORDER BY tally DESC LIMIT 20;

What are the 20 most recent types of security events? SELECT COUNT(*) AS tally, signature, signature_id, timestamp FROM event WHERE status=0 GROUP BY signature ORDER BY timestamp DESC LIMIT 20;

Here will explore data pre-processing techniques for developing machine learning (ML) algorithms to discover attack events based on behavioural analysis. Unlike predefined static rules driven software such as OSSIM, firewalls and all of the Security Onion packaged tools.

In the real world, data is often quite scrappy, missing values and so on.

A basic strategy to use incomplete datasets is to discard entire rows and/or columns containing missing values. However, this comes at the price of losing data which may be valuable (even though incomplete). A better strategy is to impute the missing values, i.e., to infer them from the known part of the data.

Imputation is about using a more intelligent model to scavenge the pieces of data that are still valuable.